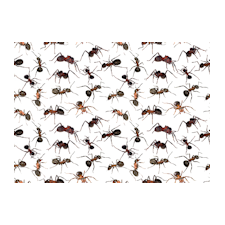 Ants are one of the most commonly found insects in buildings. They are also one of the most successful because they have a comparatively long life compared to other insects.

Ants are social insects and build nests in various places including lawns; under stones and wood; in the ground, houses and other building structures; and in the wood of dead logs, fence posts, hollow trees, and stumps. Unlike other social insects such as termites, wasps, and bees, they are not dependant on one location for their nest. If for some reason conditions are no longer favorable or their nest is disrupted, they can move the eggs, pupae, and larvae to a different location and re-establish the nest.
When ants take up residence in buildings, they can become a nuisance. They can also be annoying and destructive as an outdoor pest when they nest in lawns and gardens.

All ants have pretty much the same basic physical appearance. Ants usually have distinctly elbowed antennae, with the first segment known as the scape. This segment is followed by a series of segments referred to collectively as the funicle. Some species have such large ending segments that they take on the shape of a club, and are therefore referred to as the “antennal club.” The abdomen is attached to the thorax via 1 or 2 slender segments commonly known and referred to as the “node.” The node is an important tool in identifying different ants species due to the distinct shape and number of nodes each individual species possesses. Interestingly, ants with only one node are higher on the evolutionary scale than ants with more than one.
Many species of ants are winged. If they are winged, they have two sets, the front and hind. The front pair is always longer than the hind. When not in use, wings will extend only slightly pass the abdomen. Of ant mouthparts, mandibles are the most prominent and important. They are equipped with great strength to carry out a number of duties including carrying and breaking up food; excavating nests in wood or the ground; and defense and offense. Since mandibles carry out so many duties, they are vital to the existence of ants. The most important parts of ants, however, are the antennae, because they harbor sensory cells. Taste and touch are communicated through the antennae, so they are vital to the detection and testing of food. Like other insects, ants give off pheromones to mark trails, attract members of the opposite sex, and send out alarms. Pheromones are comprised of many different chemicals that can be detected by the antennae. When one ant encounters another ant, antennal stroking and touching occurs for the purpose of recognition. The survival of ants is dependent on antennal functions. Although not common among structure-infesting ants, several species have the ability to sting. Venom is released during the sting and may create rapid, intense pain and possible allergic reactions. If an ant stings, it is usually out of defense. Ants go through complete metamorphosis. Complete metamorphosis includes four stages: egg, larva, pupa, and adult. The larvae, which hatch from microscopic eggs, are off-white and pear or gourd-shaped as well as soft and legless. The larvae’s heads are well developed. For several days to a few weeks, the adult workers feed and groom the larvae, until several molts are completed and the larvae become pupae. In the pupal stage, the young ants resemble adult ants, except for the fact that they do not feed or move.
They also are white and soft, compared with the hard-bodied exterior of their mature counterparts. Some pupae may be in cocoons, while others are not, depending on the species. If an ant nest is disturbed, the workers may be observed scurrying about and carrying the cocooned pupae, larvae, and eggs to a place removed from danger. For ease of transportation, eggs and larvae are often stuck together and moved in clumps.
After emerging from the pupal stage, it takes ants several days to reach full maturity. Full maturity means the attainment of full color and body hardness. When all is said and done, the process of maturing from egg to adult takes 6-8 weeks, depending on environmental conditions such as temperature, availability of food, and frequency of disturbances.

Colonies of ants contain well-developed caste systems that divide labor between the adults. The presence of a caste system requires the presence of a colony. A single mated queen usually develops a colony. After shedding her wings, the queen will dig a small gallery or seek a small cavity under a stone, in a piece of bark, or in a structure to find a sufficient place to start her nest. After sealing the cell she has chosen, the queen will remain dormant while the eggs develop in her body. When mature, the eggs are laid and hatch in the sealed cell. The queen nurses and feeds the young until they reach the pupal stage. After reaching maturity, this first group of workers is always smaller than average due to a lack of a sufficient food supply. Despite their small size, they begin the real work of colony production by first digging themselves out of the nesting gallery, and then starting their lifelong duty of foraging for food for the colony and queen. With more food available, the queen is able to lay more eggs and the workers take on the additional duty of caring for the new eggs, larvae, and pupae. This obligation remains with the workers, who are all sterile females. Due to environmental extremes, competition within species, and the threat of predation, the number of successful colonies is very low. These settlements may last for many seasons. Some species’ colonies contain more than one queen, while other species have only one queen. If the queen happens to die and the colony is healthy, it is likely that another worker or reproductive female will begin to produce eggs and take over the role of the queen. There are three distinct classes that make up the caste system in an ant clony: workers, reproductive females (queens), and reproductive males.
Workers: Workers are sterile females that may be all one size or may vary in size. If they are all the same size, they are known as monomorphic. If they vary in size, they are known as polymorphic. Workers carry out all the work of the colony, as their name implies. This includes, but is not limited to, foraging for food, tending the young, and protecting the nest. In colonies with polymorphic workers, the division of labor may be assigned according to the sizes of the workers. In some species, different workers have specially adapted features to carry out specific tasks. In other species, younger workers may carry out duties that are closer to the nest while older workers go out foraging for food.
Reproductive females or queens: Queens are almost always the largest members in a colony. An unmated queen retains her wings until she is mated. After the first group of eggs has developed, the queen has the luxury of being fed, cleaned, and generally taken care of by the workers. Her only function is to produce and lay eggs.
Reproductive males: The only function of the males is to inseminate the queens. After they do this, they die within a few days. If the species to which a male belongs has winged queens, the male will also have wings. Mating may occur either in the air, on the ground, or in the nest. Adult males do not stay in the nest for long at all. Once they leave, they are fortunate to survive for any length of time, since they face great risk from predators and natural elements.